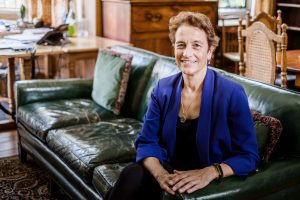 When Cecil Rhodes outlined his vision for the Rhodes Scholarship in his will, he stipulated that a Scholar should be selected for “his qualities of manhood”. Such qualities included ‘sympathy for the weak’, behaving with courage, and aiming to achieve public good – qualities that we recognise today as shared by women and men. However, it wasn’t until 1977, following an Act of the U.K. Parliament, that women were given the opportunity to compete for the Rhodes and join other bright and creative individuals who were keen to live with courage and conviction and to challenge the status quo.

Since 1977, more than 1,350 women have become Rhodes Scholars, and several of our recent cohorts have had more women than men. We have also selected a number of transgender individuals as Rhodes Scholars. Today’s Scholars come from all corners of the world, creating a vibrant global community of solidarity and friendship.

The Rhodes Trust is not the only institution that has seen this shift toward greater gender equality in its recent history. In fact, most developed countries can pride themselves on the progress made towards achieving gender equality in higher education. While imbalances still exist in some disciplines, universities are working hard to achieve gender equity. The face of academic leadership is also changing. Male college and university presidents still outnumber women 2:1 in the United States. But the world’s oldest English-speaking university has become something of a trailblazer. The University of Oxford not only has its first female vice chancellor, but women lead half of its 38 colleges.

Still, despite much progress, not a single country has achieved gender equality. Rates of gender-based violence remain terrifyingly high across the world. The rate at which women achieve parity in access to leadership roles across social sectors, from business to politics, media to technology remains frustratingly slow. According to the most recent Global Gender Gap Report from the World Economic Forum, at current rates of progress the economic gender gap will take over 200 years to close.

So, it is fitting that the theme of this year’s International Women’s Day was I am Generation Equality: Realising Women’s Rights. All of us, women and men, need to reaffirm our commitment to the struggle for women’s rights and gender equality. Doing so will not only unlock the power and potential of girls and women, but will also play a vital role in helping us tackle our greatest challenges, from climate change to poverty to terrorism.

Here at Rhodes House, we want to ensure that the exceptional young people who are awarded a Rhodes Scholarship gain the tools and opportunities to build a more equitable, peaceful and sustainable world. Through retreats, workshops, and other experiences, we bring our Scholars together and help them engage with and learn from one another to become more thoughtful, reflective and inclusive in their thinking and action.

At one of our recent Scholar retreats, an optional session focused on “being an adult in our relationships” attracted an overflow crowd. Our Scholars, female and male, were hungry for more frank conversation about how they can forge good lives, successful marriages, and impactful careers in a gender-unequal world. Listening to the conversation was both inspiring and humbling. We want our female Rhodes Scholars to succeed in all sorts of disciplines, sectors and environments, and our male Scholars to be their allies in the journey. But we should not underestimate the complexity of the issues and challenges they all face in navigating these still largely uncharted waters.

I want to challenge all of us in higher education to create more space for honest conversations about gender bias and gender equality– in the workplace, in marriage and family life, in technology and culture. With these efforts, we can better equip our students to be the change agents we need to realise women’s rights and build a better world for all.

Dr. Elizabeth Kiss (pronounced ‘quiche’) became warden of Rhodes House and CEO of the Rhodes Trust in August 2018, the first woman to hold this position. She oversees the world’s preeminent graduate scholarship, the Rhodes Scholarship. Founded in 1903, the Rhodes Scholarships support outstanding students from around the world for graduate study at the University of Oxford. One hundred Scholars (with plans to expand to 125) are selected annually on the basis of intellect, character, leadership potential, and commitment to service.

Before joining the Rhodes Trust, Dr. Kiss served for 12 years as president of Agnes Scott College in Atlanta, Georgia. During her tenure, Agnes Scott broke records for enrolment and retention and was named the second ‘Most Diversified College in America’ by Time, the country’s most successful liberal arts college for graduating low-income students by the U.S. Department of Education, and the #1 Most Innovative National Liberal Arts College by U.S. News and World Report. In December 2017, the Chronicle of Higher Education named Dr. Kiss to its 2017 list of the most influential people in U.S. higher education.

From 1997 to 2006 Dr. Kiss served as the founding director of Duke University’s Kenan Institute for Ethics, building a university-wide interdisciplinary centre focused on promoting moral reflection and commitment in personal, professional, organisational and civic life. Dr Kiss has also taught at Randolph-Macon College (Virginia), Deep Springs College (California) and at Princeton University for eight years. She is a scholar of moral and political philosophy and she has published on moral education, human rights, ethnic conflict and nationalism, feminist theory, and transitional justice.