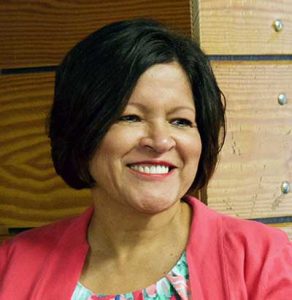 November 8 was National First-Generation College Student Day. It’s a day to recognize and celebrate the efforts of first-gen students, as many have had to overcome large obstacles and systemic barriers in order to achieve their degrees. In spotlighting first generation students the hope is that we can help reduce the barriers to success and better understand supports needed in higher education to help them succeed. November 8 was selected as the date for the annual celebration to honor the anniversary of the signing of the Higher Education Act of 1965.

What was your motivation for going to college and earning a degree?

Ever since I was seven years old, I dreamt of being a teacher. I played teacher with invisible students in the Grant Projects, where I grew up in Harlem. My trajectory was not traditional. I became a teenage mother and a high school dropout. I knew that I wanted something different for my daughter. I realized that receiving an education would improve my socio-economic status, so I received my high school diploma at the age of 21 from Big Bend Community College while in Karlshruhe, Germany. When I moved back to the states, I attended Central Texas Community College in Killeen, Texas to receive my associate degree in General Studies and then transferred to the University of Mary Hardin-Baylor in Belton, Texas to earn my Bachelor of Science in Elementary Education. I became a bilingual teacher in Houston and taught in the barrios. When I witnessed how poorly parents were treated in the schools where I taught, I realized that I needed to go back to school and learn how to be a principal. I was convinced that if I became a principal, families in my school would be treated with respect. I attended the University of Houston Clear Lake and earned a Master of Science in Preschool Education, Mid-Management and Superintendent Certifications. After teaching for seven years, I served as an assistant principal for two years and then an elementary principal, serving as a school-level administrator for seven years. May I tell you that in the schools I served, the achievement gap closed? Academic achievement went up by double digits in one year at all the schools I served. Si se puede!

As a principal in Orange County Public Schools in Orlando, Florida, I witnessed overt racism. I was the first Latina principal at the school. One of the overt racist experiences I saw was that students who were brown and Black were not served lunch if they did not have any money. I also saw that the cafeteria was not clean, and I spent two and a half hours in the cafeteria daily to ensure students ate and were seated at a clean table with clean floors. That is when I began to realize that if I become a superintendent this would not happen in the schools I serve.

In his book, Cold Anger, Saul Alinsky writes: “This idea of turning your anger into ‘cold, controlled, and careful’ and guiding it to a target makes a lot of sense. I almost envision it as a skill that an individual has to master. The more that we are aware of what makes us angry and develop ideas of what we want to do with the anger, the easier it will be to transfer this hot anger into cold anger because you be ‘guiding it to a target’ instead of exploding and taking out your anger in unproductive ways.”

In 1999, I became certified as a superintendent, and I knew as a Latina I would not get the job without a doctorate. Why? All the superintendent positions were held by the dominant male culture. In 2000, I decided to apply to The University of Texas at Austin to earn my Ph.D. I knew that if I applied for a superintendent position, having that distinction would help me get selected for an interview. It took 16 years to get my first job as a superintendent. I finally broke the glass ceiling. Still, there are too few Latinas leading school districts.

Who inspired or supported you in your college-going journey?

The first person who inspired me is my daughter, Jasmine. I did it for her.

The person who has been there for me throughout my journey is my mother. She is my strength, my rock, and my guide, and she is still here for me now. She is 87 years young.

Looking back, what was the biggest challenge you faced as a first-generation college student?

My biggest challenge was going through a divorce and becoming a single mother. I did not have a job and had to use public assistance for food, to pay my light bill and rent. I also worked at the financial aid office at the university so that I could provide for my daughter and myself while going to school. As of today, I do not know how we did it, but we did.

What advice would you give to a first-generation college student today?

My advice to first-generation college students:

Be a lifelong learner; keep learning and growing.

Dr. Danna Diaz serves as superintendent with the Reynolds School District. She has served the interest of public schools spanning three decades in various positions in both large and small school systems. Her administrative career includes 24 years as an administrator in five states – Texas, Pennsylvania, Florida, Washington, and Oregon.

Known for her no non-sense attitude and unparalleled work ethic, Danna’s reputation in the education community precedes her, which was why she was asked to join the Reynolds School District. Prior to joining Reynolds, Danna worked as the superintendent of the San Juan Island School District, an area superintendent at El Paso ISD, and director of student engagement at Fort Worth ISD. She was instrumental in the development, implementation, and evaluation of district programs and services that address academic achievement, student leadership development, school completion, and college readiness.

In addition, for all the years she tirelessly worked her way through the ranks, her proudest moment includes not one, but two Teacher of the Year awards, earning the respect of her peers and high level administrators.