This is the first of three blogs featuring current college students who participated in American College Application Campaign events this year. This blog features Ariana Lopez, a freshman at University of Redlands and 2020 graduate of Fontana High School in Fontana, California. 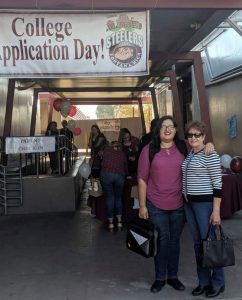 Ariana Lopez is in the middle of her first semester at University of Redlands, where she’s taking Chinese philosophy, along with contemporary literature, her first-year seminar, and a peer mentoring class called Students Together Empowering Peers. Ultimately, Ariana plans to major in psychology. For now, she’s enjoying the variety in her classes. She’s been saying, “I want to learn more. I want to do cool things,” since she was in sixth grade and decided that college would be her end goal.

For Ariana, going to college “is kind of a way to not only further myself and get a good job after, but it’s also a thank you to my grandparents who raised me. It was not only for me, but also for my family to be proud of me.” No doubt, they are very proud. When asked to identify one person who supported her and influenced her decisions about where she would apply, Ariana didn’t hesitate in identifying her grandmother. As a waitress, her grandmother meets a lot of people and she often tells her friends and customers about Ariana. A few of them went to University of Redlands and suggested it might be a good fit. At first, Ariana wanted to go to a far-off University of California campus, but she obliged her grandmother and did some research.

In the end, Ariana decided her grandmother’s friends were right, and she included University of Redlands among the colleges where she applied. The fall semester of her senior year was filled with classes, friends, and obligations to marching band. Finding time to research and apply to college would have been difficult without her Advancement Via Individual Determination (AVID) classes and her school’s College Application Day. Fontana High School is one of more than 7,000 high schools across the country that host application completion events as part of the American College Application Campaign. For Ariana, that support was critical. She was so busy that she felt having time allotted during the school day to work on her college applications was really helpful. She could get help from teachers when she needed it and submit applications on time – including to the University of Redlands.

A year later, Ariana has found a second home at Redlands. Even though all students are attending remotely this fall, she has discovered professors who want to help and a “super helpful, tight-knit community.” Yes, she admits, “It is sad in a way to not experience campus in the first year, but I know it’s for everyone’s safety. So, it was a bummer. But it’s nice to see how understanding everyone was and all the support that poured through during this time. It’s really nice to know that even though we are so separated in terms of distance, everyone is okay with talking to each other.”

For an extrovert who thrives on social interactions, online learning was difficult at first. It’s gotten easier, though. Ariana and her classmates have fallen into a groove. She got over her fear that the teachers would be scary. In fact, she’s found that at Redlands, “the teachers are always down to help you or talk you through any situations.” Her advisor and professors helped her through a tough spot at the start of the year, leaving her pleasantly surprised with “how okay everyone was with [my decision] and how willing they were to understand and help.”

Getting over that fear is something Ariana wants to encourage other students to do. Her best piece of advice for this year’s seniors is: “Don’t be scared of college. I know when I was thinking of it, I was scared of it. It’s a big, grand thing we hold up in society. And that can be kind of scary – the idea that I’m making my own schedule and choosing my own classes. But go for the college that fits you the best and accepts you. Don’t be afraid. Take that leap of faith.”

Ariana is aiming to graduate with a degree in psychology with a focus on adolescence. She’s considering a career in social work, or something else that will allow her to help others. She knows the journey will be hard. It’ll be a long process. But in the end, she says she reminds herself and others that “it does get better. You just have to push forward. You’re going to get through.”

Adrienne Enríquez shares her time as the American College Application Campaign’s state training and communications manager and as program manager for Oregon GEAR UP where she is responsible for coordinating statewide initiatives and strategic partnerships including Oregon Goes to College.