Inequities in Socioeconomic Opportunity: A New Opportunity to Reflect 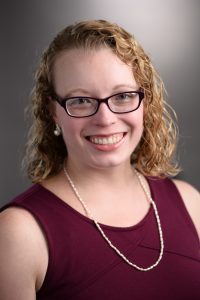 I recently attended the release event for the newest (2018) edition of the Opportunity Index, an annual report that presents a snapshot of successes and challenges related to improving socioeconomic opportunity in the United States. The Index measures four dimensions—economy, education, health, and community—via a total of 20 indicators in order to give an “Opportunity Score” for the country, each state, and each county. These indicators include factors such as poverty, internet access, preschool enrollment, birth weight, voter registration, and incarceration, among others.

The overall news was fairly heartening. The national Opportunity Score has risen 1.2 percent since last year and 3.9 percent since 2016. The states’ average economy and education scores have increased steadily over the past 3 years, and community scores also increased throughout that period. As someone who advocates for better education, the gains we’ve made in graduation rates, postsecondary degree attainment, and preschool enrollment, while still not large enough, are gratifying.

This year, for the first time, the Opportunity Index presented some national data broken down by race/ethnicity—additions that make the Index more useful, but also even more sobering. In education, the fact that the results were unsurprising for those of us who work in the field made them no less appalling: for example, the large and well-known gaps in postsecondary completion across racial/ethnic groups. 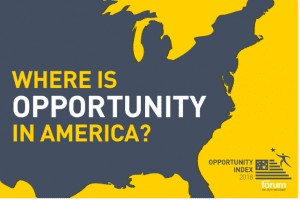 Another example, this one in health: rates of low birth weight increased in most states, driven largely by poor outcomes for African American mothers, who were almost twice as likely to deliver an underweight baby as were Caucasian or Hispanic mothers.

As a child, I lived in Baltimore City (treated as a county in the Index), which this year has an Opportunity Score of 39.9 (out of 100)—a D+. However, my parents were able to move my sister and me just a few miles away to Baltimore County—which earned a solid B– (56.5) in 2018—so we could access the greater opportunities there. We went to better schools and lived in a safer neighborhood, and I’m very grateful for those advantages and all the others that I was born with or moved into. But now my thoughts go to the neighbors we left behind.

Of course, challenges are not limited only to certain groups, cities, or regions. For example, despite increases in rates of health insurance coverage, the nation’s health score fell 2.8 percent since 2017, a trend also evident in the states. The declines were caused mainly by large increases in “deaths of despair”—those due to drug/alcohol poisoning or suicide. My current home, the District of Columbia, saw an 82 percent increase over 2017 in deaths from these causes, and we were not alone.

However, improving socioeconomic opportunity in our country can’t happen on any significant level without acknowledging our racial divides and then working to fix them. Just as calling out hugely disparate incarceration rates for African American men compared to other groups (also highlighted in the Opportunity Index) has fueled movements that have begun to effect incremental changes in policy, other social inequities must be named and publicized before we can hope to do anything about them. I am grateful I have the opportunity to speak up about inequities in the education sphere as part of my advocacy work, and I encourage all of you who have expertise in—or simply care about—economic, education- and health-related, and community inequities to continue doing what you can to effect change for the better.