SEL, resources are keys to success

Prior research tells us that several pieces of student information, such as high school GPA and ACT Composite score, can predict students’ college GPA and likelihood of staying in college. In the study The Relationship Between Social and Emotional Learning Skills and Resource Use for First-Year Use Outcomes of Hispanic First Generation College Students, we are adding to this body of knowledge by checking whether other types of information also can predict college performance, such as (1) social and emotional learning (SEL) skills and (2) on-campus resource use. We sought to extend our predictive knowledge to a lesser studied group by examining Hispanic first generation college students (FGCS), who are increasingly represented in the education system.

First, our results indicated that Hispanic FGCS had lower academic performance than Hispanic students who were not FGCS. Specifically, Hispanic FGCS had lower GPAs (2.57 vs. 2.87) and were less likely to have earned the proper number of credits to be on-track for a timely graduation after their first year of college (52 percent vs. 63 percent.

By drilling down further into the data, we found that several non-academic factors played a role in these students’ success. Namely, the skills of Academic Discipline (putting effort into one’s schoolwork), completing homework in high school, and using on-campus academic resources (e.g., tutoring, meeting with professors) were accurate predictors of Hispanic students’ first-year GPA in college. This was true for all Hispanic students, first generation and non-first generation alike. For both Academic Discipline and academic resource use, the more a student had or used the better they performed. This can be seen for Academic Discipline in Figure 3 (below). 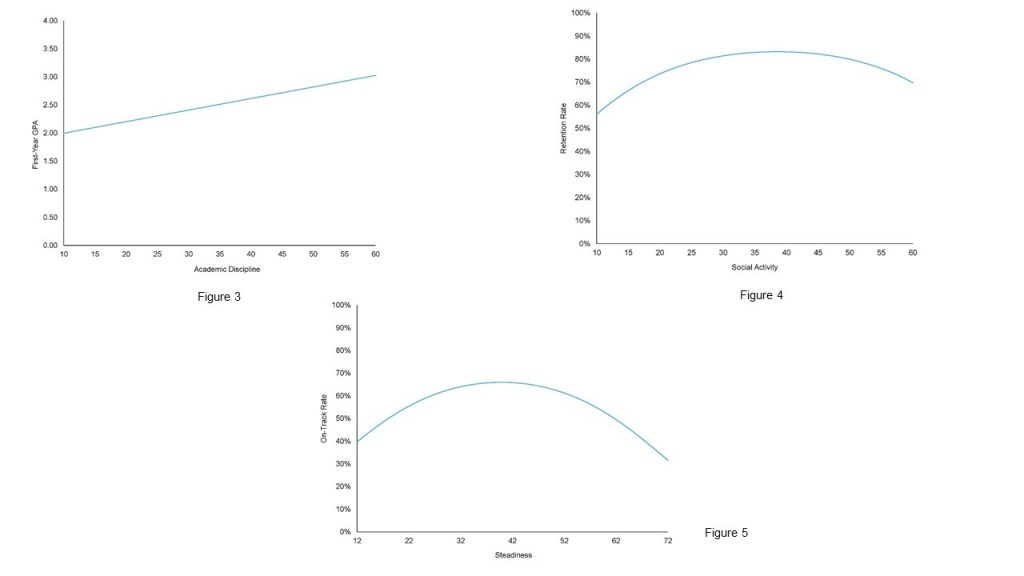 Our results indicate that SEL skills and on-campus resources are predictive above and beyond typical measures (e.g., high school GPA, ACT Composite score) of Hispanic students’ first-year college success, indicating how critical they are. While we initially found that Hispanic FGCS had lower college outcomes than Hispanic non-FGCS, we found that these differences may really be related to SEL skills and on-campus resource use. This suggests that both SEL skills and academic resource use play an important role in the college success of all Hispanic students and that more attention must be dedicated to these areas.

It is our recommendation that, beginning in grades K-12, all Hispanic students receive education about and are assessed on SEL skills. At the college level, college support personnel should work with Hispanic students to help them achieve a high level of Academic Discipline while maintaining balanced levels of Social Activity (e.g., participating socially on campus, but not overdoing it) and Steadiness (e.g., learning how to have a balanced relationship with one’s emotions). Ample access to academic support resources should also be made available on campus and students should be encouraged to use them.