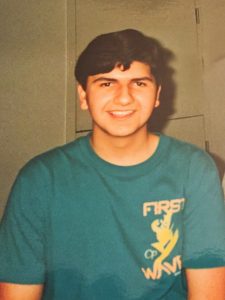 September 15-October 15 is traditionally observed as Hispanic Heritage Month. We will feature stories from Hispanic Americans who will share their journeys, their struggles, and their successes.

This month we observe Hispanic Heritage Month as a way of celebrating the diversity and richness of Hispanic cultures from Latin America and the Caribbean, as well as their longstanding and important presence in North America. For me, it is also a reminder of a time, many years ago, when I arrived in the U.S. from Mexico as a teenager. Fitting in is a challenge for most adolescents. As a new immigrant, I often felt that I had to subvert my “Mexicanness” in order to fit in. In fact, when people would make jokes about Mexicans, I was compelled to play along (remember the Taco Bell ad campaign? I used to be asked by my peers to say Yo quiero taco bell because my accent matched that of the character in the commercial). At the time, I was willing to deal with the micro aggressions in order to fit into a new social and cultural group. It was the “price of admission,” I used to say to myself.

Over the years, I eventually figured out how to integrate my home and adopted cultures—and to speak up when I thought something needed to be said. These days I refer to myself as bi-cultural and feel comfortable navigating multiple cultures. However, for many Hispanic and Latino students fitting in comes at a substantial cost: feelings of shame and anxiety at being told you don’t belong, increased stress, confusion about one’s identity, difficulty concentrating on school work, being bullied, and many others.

This year, Hispanic Heritage Month comes as Hispanics (and other minorities) are increasingly berated and marginalized for short-term political gains. This should not let us down. We know that Latinos no se rajan (we don’t crack under pressure). This month let’s resolve to celebrate our freedom, but not from the Spanish crown—as many Latin American nations and former Spanish colonies do around this time of the year. Let’s celebrate freedom from the shame of sharing our culture and language with pride. Let’s celebrate freedom from having to give up part of our identity in order to fit in. Let’s celebrate freedom from being bullied by those who seek to divide us. Let’s celebrate our diverse voices joining to proclaim: We are here (and always have been), we belong, and we are the future of a nation that is stronger because of its diversity and because of the many contributions of Hispanics and Latinos! Vamos a seguir adelante (Let’s keep pushing forward)!