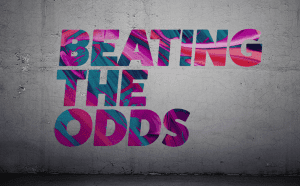 Beating the Odds’ by Roadtrip Nation follows the journey of three students who have overcome challenges to make it to college as they meet successful professionals, including former First Lady Michelle Obama, who share their own stories of growth through adversity.

Costa Mesa, Calif., June 4, 2018 – Beginning June 3, a new one-hour documentary special, “Beating the Odds,” will be streaming at beatingtheoddsfilm.com and air nationally on public television. Produced by career exploration nonprofit Roadtrip Nation, and presented by KQED, “Beating the Odds” follows three college students as they explore careers through a series of interviews with remarkable professionals who have overcome life challenges to succeed in their fields. The college students are overcoming obstacles of their own, including opioid-addicted parents, navigating the foster care system, and surviving poverty.

Supported by ACT’s Center for Equity in Learning, with advisory support from the Better Make Room campaign, “Beating the Odds” explores the ways in which people overcome tough circumstances, make it to and through college, and gain resilience through hardship. The film follows James “Ikie,” Estephanie, and Esther as they travel from Long Island to Los Angeles in Roadtrip Nation’s green RV.

The film features actors, politicians, athletes, and educators, all of whom are now dedicated to improving pathways to make the world a better place for those who need it most. The roadtrippers cross paths with former First Lady Michelle Obama; author and foster care advocate Ashley Rhodes-Courter; the first openly gay mayor of Long Beach, California, Robert Garcia; actress and producer Elaine Del Valle; and Paralympian track star Scout Bassett, as well as other inspiring individuals.

“Roadtrip Nation is about giving people opportunities to explore their potential and find a path through life that is meaningful and impactful,” said Mike Marriner, co-founder of Roadtrip Nation. “That’s why we were pleased to have ACT’s Center for Equity in Learning fuel this initiative, with advisory support from Better Make Room. Everyone has their unique road, but some people have been dealt an especially challenging hand. We wanted to show the world that your circumstances don’t define you and that adversity can actually become a motivator rather than a barrier, as the roadtrippers in this documentary demonstrate through their curiosity, courage, and strength.”

“Beating the Odds” roadtripper “Ikie” hails from West Virginia coal country, where his father became a casualty of the opioid crisis and where he attends college. He is studying political science in hopes of alleviating the problems facing his community. Esther grew up struggling with depression and anxiety as she made her way through the foster care system. She was adopted into a loving family and doesn’t want to let her past limit her as she studies theater and elementary education. Estephanie was raised by a single mother in the Bronx, where financial hardship was an ever-present reality. She is dedicated to turning her love of dramatic performance into a viable, fulfilling career. Ultimately, these three young people hope that sharing their stories can inspire other students who are facing similar obstacles.

“Every life involves twists and turns, and a key skill is being able to navigate through the successes and the setbacks — even when the odds seem stacked against you,” said ACT CEO Marten Roorda. “The roadtrippers, through their individual journeys, bring to life our mission of helping people find the education and workplace success they are seeking in their lives.”

“Better Make Room is a campaign that gives young people the space and the tools they need to create their own movement to complete higher education,” said Eric Waldo, executive director of Reach Higher, the initiative that oversees the Better Make Room campaign. “We were excited to help Roadtrip Nation share stories of beating the odds and overcoming great challenges with ‘Ikie,’ Esther, and Estephanie. We know that the more we share stories of grit and perseverance, the more young people will see reflections of themselves and feel empowered to complete their education and own their futures.”

Roadtrip Nation, a nonprofit organization, is working to change the way people approach choosing a career by creating content, products, and experiences that guide individuals in exploring what’s possible when they follow their interests. They took their first road trip in 2001, and have driven over half a million miles and made more than 30 documentaries — broadcast over 100,000 times on public television — sharing the stories and advice of inspiring leaders in all kinds of careers. Roadtrip Nation’s career discovery resources are fueled by an online archive of thousands of video interviews and stories, with personalized career exploration, educational programs for middle school through college that are accessible to millions of students, plus live tours and events all around the country. They’re the authors of four books, including the New York Times best-selling career guide, “Roadmap.” Along the way, Roadtrip Nation has benefited from world-class partnerships with great companies and foundations that have supported their mission to empower people to define their own roads in life. To learn more, visit roadtripnation.com/about.

About ACT’s Center for Equity in Learning

About the Better Make Room Campaign

Better Make Room is a campaign within Reach Higher that celebrates and elevates the stories of Generation Z, including today’s high school and college students. Reach Higher, started by former First Lady Michelle Obama during her time at the White House, is an initiative that gives students the tools they need to go to and complete higher education, whether at a university, community college, through an industry-recognized certification, or the military. To learn more, visit www.BetterMakeRoom.org.

KQED serves the people of Northern California with a public-supported alternative to commercial media. An NPR and PBS affiliate based in San Francisco, KQED is home to one of the most listened-to public radio stations in the nation, one of the highest-rated public television services and an award-winning education program helping students and educators thrive in 21st-century classrooms. A trusted news source and leader and innovator in interactive technology, KQED takes people of all ages on journeys of exploration — exposing them to new people, places and ideas. www.kqed.org